Inauguration of the analysis laboratory 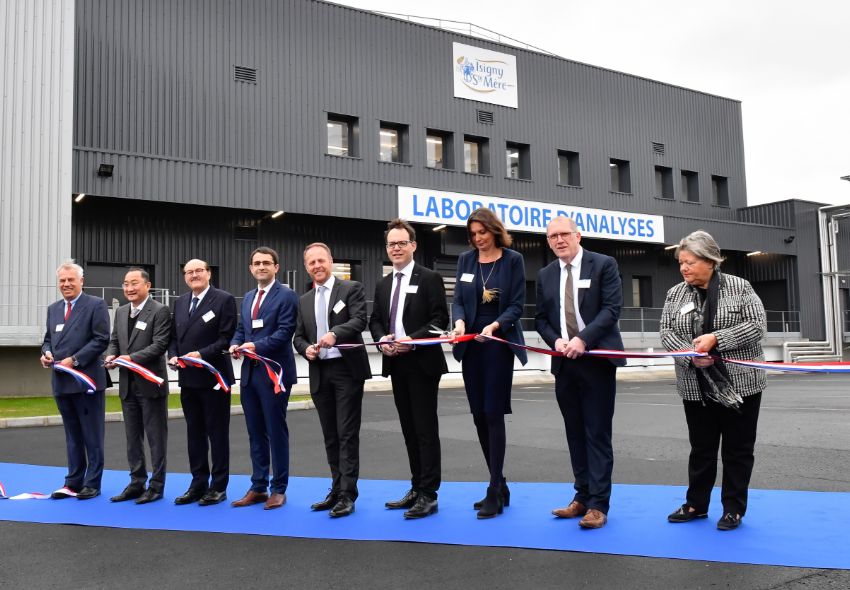 Our Cooperative has further strengthened its expertise with the inauguration of its new laboratory for the analysis of infant milk formula.

On 1 March 2019, our dairy Cooperative inaugurated its new laboratory for the analysis of infant milk formula. Not only is Isigny Sainte-Mère recognised worldwide for the unique quality of its Isigny butters, creams and cheeses, it is also one of the leading European manufacturers of infant formula milk powders.

With this new laboratory, the Cooperative intends to consolidate its expertise and its strong presence in this growing global market.

The new Isigny Sainte-Mère laboratory brings together 70 laboratory assistants, responsible for the continuous analysis of the infant milk formula produced within the Cooperative. Among them, qualified technicians and engineers, all specialised in microbiological and physico-chemical controls, as well as analytical development engineers with a PhD in science, who collaborate with international experts and researchers on the implementation of the latest analysis methods.

In order to guarantee the excellence and safety of infant milk powders, the Isigny Sainte-Mère teams employ cutting-edge technology, including more than 300 high-performance machines. Inspection procedures are rigorously applied, in line with the standards in force in each country where the products are sold.

The clear goal of the Cooperative is to maintain increasingly high standards in terms of product quality, hygiene, food safety, and traceability.

The inauguration of this laboratory is a source of pride for all of us at Isigny Sainte-Mère, but it is also the culmination of an in-depth reflection. This major investment of €7 million reflects our ambitions: to further strengthen our market positions and demonstrate our expertise to our customers, by guaranteeing consistently higher quality products. It will allows us to feel positive about the future of our Cooperative, which has always shown a strong sense of innovation and excellence in its work

73 years of expertise in milk powders

In 1947, Isigny Sainte-Mère set up the first spray drying tower in France to produce milk powders for the French market. A true pioneer which began producing infant formula milk in 1954, the Cooperative has never ceased to innovate in order to develop products adapted to the specific nutritional needs of infants and children.

More than 250 different and unique formulas have been developed for its customers in France and around the world, who recognise its unique expertise in the field, backed by the safest processes.

Today, with 5 drying towers and 2 packaging lines, our production capacity for infant milk powders has reached 45,000 tonnes per year, which makes Isigny Sainte-Mère one of the major players among European manufacturers on the market. Building on this success, we have now adopted a long-term development strategy for the infant milk powder business line. This will allow us to meet growing global demand for these products

Founded in 1909 in Normandy, the Cooperative is well-known for its products produced in keeping with tradition and meeting the highest quality standards. Located between the Norman bocage and the Bessin and Cotentin marshes, it enjoys the best of Normandy: tender grass, irrigated by salt water from the sea and fresh water from the marches, rich soil and a humid climate, which make Isigny’s milk the pride of the whole region.

Collected within a 100-km radius of the Cooperative, the milk is sent to Isigny Sainte-Mère within 48 hours, so that it retains its properties. This is an exceptional raw product, ideal for the production of infant milk powders. The deeply committed men and women of the Cooperative work every day to promote the milk of their terroir and make products of outstanding quality.